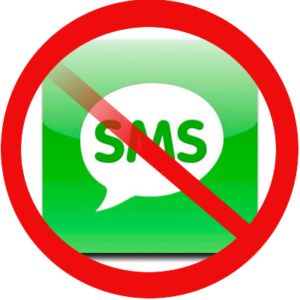 As you may already know, the “evil” telecom companies want to squeeze every cent they can out of you by making up fees. SMS or Short Message Service is what is usually described as texting by your carrier. In the last decade before the explosion of smartphone, SMS used to fill a gap where there was little to no connection to the Internet. SMS functioned though SMS centers hence requiring its own infrastructure.

Nowadays, this is completely irrelevant as most smartphones typically use standard mail protocols such as SMTP over TCP/IP. Meaning, if you have a smartphone, it is very likely you are being charged for something that should be covered by your data plan alone. Of course, I am not familiar with pricing from all cell phone companies; however, if you are on a “bundle” plan and texting is part of it, most likely they are just getting a bundle of money from you. Otherwise, if it is clearly spelled out as a separate fee, you might want to consider just not paying for it and using alternatives that require your data plan alone.

There are several apps out there, each one with its limitations, but with more features than SMS.  So far, Kik is my favorite cross platform messaging app as it is free and it is available for iOS, Android, BlackBerry, and WP7. The makers of Kik are currently being sued by RIM, the maker of BlackBerry Messenger END_OF_DOCUMENT_TOKEN_TO_BE_REPLACED